Season 2, Episode 7: Let Me Be Your (Pumpkin) Star

Season 2, Episode 7: Let Me Be Your (Pumpkin) Star

If you didn’t get the joke in the title, it’s totally fine. But I will enlighten you.
The song "Let Me Be Your Star" is an original composition from the canceled NBC sitcom/musical “Smash”, that was created by the incredible Theresa Rebeck, produced by Steven Spielberg, and starred (amongst others) Debra Messing and Katherine McPhee.
The show centered around the development and launch of a new Broadway show about Marilyn Monroe, “Bombshell”, and the rise of Karen Cartwright (played by McPhee), an inexperienced Broadway ensemble member to fame as the star of the show. Her rival is the more established Ivy Lynn (Megan Hilty) - who herself is looking to finally secure the leading role she’s been fighting for her whole life.
I’ll admit, I was an early fan of the show. The pilot was electric. The show’s production value was high, the songs and storylines were engaging, and it was a unique premise. But the quality started to decline right after the success of the pilot, (at no fault of the cast) largely because of poor writing and an inability to commit to any clear character development.
But at least we’ll have "Let Me Be Your Star”, a song so compelling that it was nominated for a Grammy.
/rant
If you’re still with me, you may be thinking: But TMPS, WHY would you spend the first 200 words of this entry discussing a show that went from great to terrible to quickly?
Well because just like Smash, pumpkin spice has a casting conflict.
It seems like pumpkin spice is always getting typecast as a dessert or side flavor and never a main dish. As I have gone through the seasonal aisles of many stores, making a log of what I find and what to review, the ratio of dessert/snack products to things that can be eaten as a part of an entree is ENTIRELY one-sided.
So today, I’m going to buck the trend and make pumpkin spice the star of a meal.
DAY 7: Trader Joe’s Zucchette Pasta and Autumnal Harvest Pasta Sauce 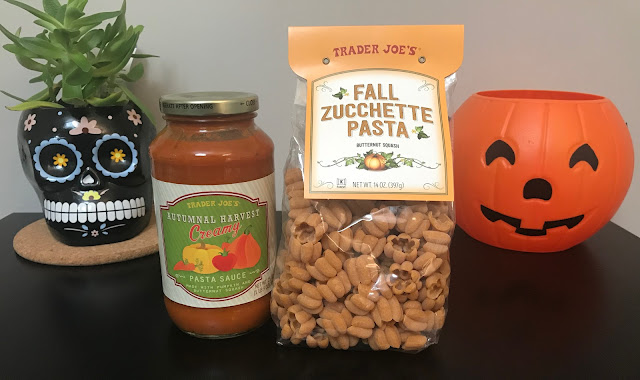 When I saw these two items paired up on a display at TJ’s and I knew I had to try them.

First thoughts: I’m a big fan of this pasta, or at least its shape and color. It is butternut squash based, (and not pumpkin) but that’s fine by me. It looks like it is going to be challenging to cook (but not overcook), and it will hold sauce well with the bowl shape. BONUS: they look like mini pumpkins. I approve!

The sauce DOES contain a bunch of pumpkin, but alongside other squashes, tomato, and carrot. The carrot worries me here. When I have had it in sauces before, the sweetness/flavor have risen to the top and blown out most others.

To cook this pasta, I am going to blanch it. Blanching is a cooking technique where you take an ingredient that has been boiling (usually a vegetable), and plunge it in ice-chilled water to stop the cooking process.

Why do this? Because even after you take something out of boiling water, it’s still cooking from the heat it contains! I know, it’s pretty wild.

But my thinking here is that this oddly-shaped pasta could easily overcook and fall apart. So I am going to boil it and then shock it to stop the cooking process. I’ll then heat the sauce separately and mix it in.

To start, I brought salted water to a boil and added the pasta to boil for another 8 minutes. I forgot to fill the ice tray, so I instead took some cold water and put it in a metal bowl in the fridge for about 30 minutes.

When the pasta was done, I drained it and then dunked it in the cold water. I actually had to do this in two parts because my strainer was too small, but it still worked. 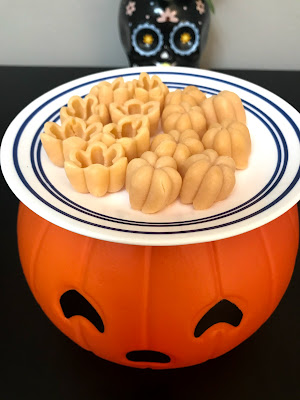 I tried some of the pasta by itself and I really liked it. The flavor of the squash comes through lightly, and the shape was fun to squeeze between my fingers. The blanching WORKED, and the pasta kept its shape and did not overcook.

I tried a spoon of the sauce alone, and the carrot is 100% the dominant flavor. But you can taste the butternut squash and pumpkin, which is really nice. It is thicker than other sauces I’ve used, so I cut it down with 1/4 cup of water and heated it to a simmer in a saucepan.

You might be thinking: But there’s no “pumpkin spice” per se!

And you would be RIGHT. So that’s why I busted out some pumpkin pie spice and added four generous shakes to my sauce mixture. After some stirs, I tasted and IT WORKED. The pumpkin spice added some sharpness (from the cinnamon) and depth of flavor to the sauce. I honestly feel like they should add it at baseline. @ me, Trader Joe’s. 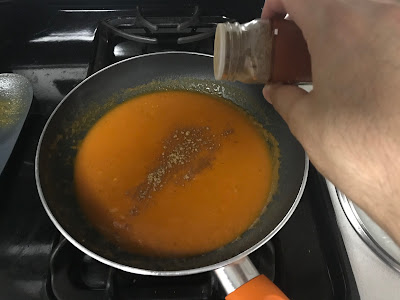 Once ready, I poured it over the pasta and stirred.

So confession time: I stirred too vigorously and tore up most of the pasta pumpkins. 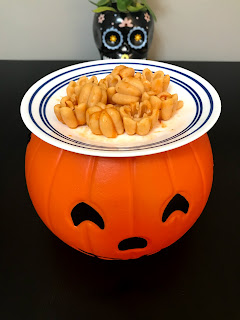 But when I ate the finished products together, they were great. The sauce and pasta really work together and the pumpkin pie spice was a dynamite addition. I just wish the sauce had the spices at baseline and that the carrot was less dominant of a flavor.

Moral of the story: Pumpkin spice makes EVERYTHING better. 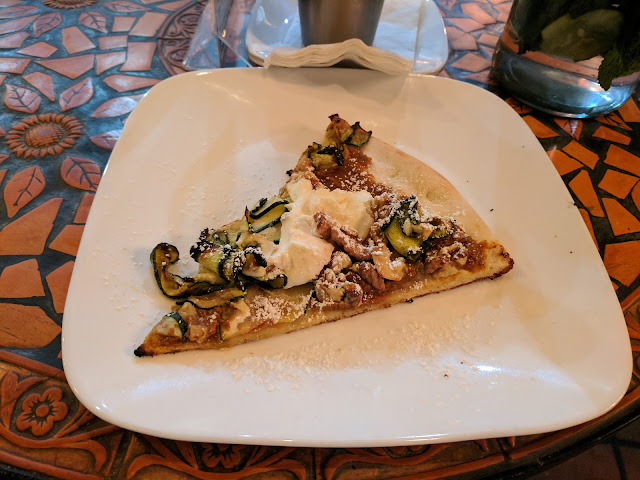